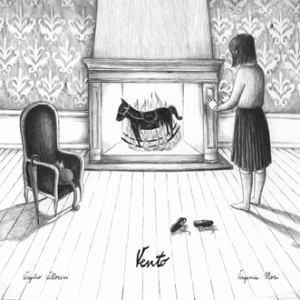 Inspired by techniques that date back to the origins of film, this book pays homage to the intimate relation between image and movement. Virgilio Villoresi’s idea for the book was to animate Virginia Mori’s illustrations using a pre-cinema technique. “Vento” is the outcome of a dialogue between both artists’ imaginations. This project is the first of a series of animated, interactive books whose pages will unfold through time, giving the reader the possibility to construct and deconstruct the plot. As each image unveils its own story, the reader is free to imagine what connections may or may not exist between them.

Virginia Mori was born in Cattolica in 1981. She lives and works in Pesaro.

She studied illustration and animation at the Art Institute of Urbino, an educational experience that helped her build and consolidate her artistic imagination and allowed her to make her first animation shorts and illustrations. She has participated in many art events in Italy and abroad. In 2008 she won the “SRG SSR idee suisse” at Annecy’s Call for Projects, that allowed her to create the animated short film “Il gioco del silenzio”. The film was subsequently awarded and selected for various international festivals and in 2011 won the “Abbaye de Fontevraud” award. Following this last award she had the possibility to work on her next film during a residency at the eponymous French Cultural Center. The film is currently in production thanks to the support of Ciclic and 25films. Her black ballpoint pen designs have been shown in numerous group and solo shows in Italy and abroad.

Temporarily out of stock